2005 is approaching its final tick-tock. People are getting their list of resolutions and wishes. And whoever is doing that would be expected, at least for himself, to keep up his promises and to hope that some of his wishes come true. But life had taught me-the hard way, not to have resolutions made because simply I’m not the type that can keep any. As for wishes; I don’t make them either, because many a times I was disappointed when I expected things to happen and they didn’t. Not this time, I do not expect anything from anyone and therefore I maintain my peace of mind. Instead; I count my blessings of the past and just wish for a better year ahead. Whatever might come, it will always be for the better.
So instead of dwelling on the doors of tomorrow, let me count my 2005 blessings:

It’s been exactly a year since I have retired. A lot of people have warned me against it saying that an active person like me can’t just sit home and do nothing. Well, let’s see what I have done with my free time during this year:

1- Blogging: although some might think that blogging had a negative social effect on me, but I have realized that it was not a negative point after all. My social life became more organized to include only the people that I feel comfortable with. I have learned to say “No” to “the time wasters”, which gave me more time to spend with my close friends. I also did more cyber socializing; I got to know other wonderful people through the net and realized how “I’m not alone” in many things that bothered me before in our hypocritical society. I think I got to realize the true Kuwaiti’s souls that otherwise were masked behind social obligations. And that by itself was a blessing.

2- Courses online: I successfully finished a course online and I’m looking forward to do more.

3- Two of my poems have been published in books sold on the internet.

3- Getting into photography: a hobby that I discovered only through the past year and I’m looking forward to do some courses on that subject online.

4- Traveling: I traveled four times this year at times which had not been possible if it was not for my free time. And I will crown that with my trip to Bahrain for New Years Eve to meet a friend whom I have not seen in four years. I’m looking forward to spend my Birthday (31 Dec.) with warm hearts as I did last year in Spain. Wish me good luck in finding my other half ;)

5- I got closer to my family: especially to my parents which was not the case in the past few years.

6- I got my Engineering Consultancy Certificate in construction from the Society of Engineers. The certificate which gives me a lot of options if I decided to go into construction business again.

7- Yoga; although my yoga classes at the end of this year had reduced drastically due to family obligations. I still have my customers who are willing to resume classes whenever the time is right for me. And I also have new customers whom I’m planning to fit in my schedule.

Well, that was a lot to do, and so far I’m not bored of staying home. And although I do not have the financial privileges I had before, but people do adjust and I am contented with what I got. And would not replace it for all the money in the world.

1- Kuwaiti women’s political rights were finally approved after more than forty years of struggle. And although I do not consider that as a right as much I consider it an obligation and a responsibility, but nevertheless, the first obstacle is cleared and I thank the mighty God for that.

2- After years of struggle with my ex on the proper way of bring up our children, I finally see that my efforts were not in vain. My kids seem to be heading in the right direction with open mindedness. They are making their own decisions, and I’m proud of them. The real joy of a parent trying to bring up a healthy generation in a confused society.

3- My mom's health is stable, although she still suffers from cancer, but nothing that the pills can’t take care of. God has been mercifully kind to us.

4- My half sister’s health improved and is improving unexpectedly. We thought we lost her for cancer few years back. She had to go through tedious operations and chemotherapy. Now she’s back kicking and resumed her work at the office, may God always bless her with good health, she deserves the best.

5- For the first times in years I do not feel depressed with the pouring rain even after losing my Internet connection. I guess this is a good omen.

Well, I’m sure that there are a lot of other things that escapes my memory in present, but not to make this list very long, I have to end it right here.

Please share with me your 2005 blessings
May you have a wonderful year ahead, and happy New Year

Ah; and happy birthday to me :D

A letter to God: 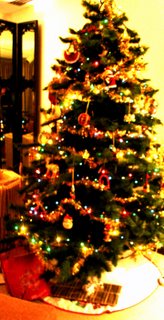 As this soul you lent me,
Bound and beholding forever
To your privileged proximity,

Has ascended to your way

Has seen your light at the end
Of a dark tunnel, and has cried:
Unto me thy light send

Unto the dear, the beloved
Unto human race
Spread, as an ocean, spread

And shine on all a brighter day